No Questions - No issues

I came in a project of some 70 people, with 3 Scrum teams of some 12 people each. We know 12 is too many, but that's another story.

At a Sprint Planning meeting I asked one of the teams: "What would be the measure of success for this Sprint?" They looked at me: "What a strange question! We're Agile. We deliver working software. Don't you know?" I asked: "Shouldn't we have a measure of success, to know that we really did a good job?", and I suggested: "No Questions, No Issues". That's easy to measure: one question, or one issue, and we know we failed. No question, and no issue, and we know we were successful.

The first reaction was: That's impossible! Surely they have some questions when we deliver, and there always may be some issues. I suggested: "You find a way. It's just a simple requirement: "No Questions, No Issues". 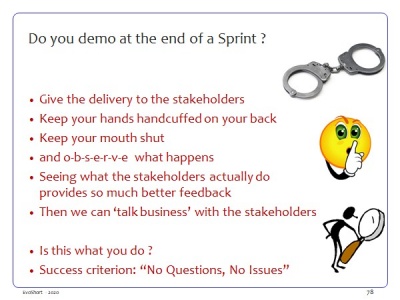 Interestingly, they immediately started thinking how they could deliver according to this requirement. For example, someone thought: "Ah. Perhaps halfway the Sprint we ask someone to check it out, to see whether he would have any questions?" I said: "You're on the right track. Just find a way. The requirement is simple.

Actually, I didn't expect them to be successful in this first Sprint, perhaps after a few. Surprisingly, they were successful. Well, kind of.

Until now, they always made a 'demo': they showed something, and the users watching the demo only could watch. That's boring, causing them to ask boring questions, like: "Why did you use this colour?", or: "Can't you add this or that?" The 'Product Owner' immediately recorded the 'new requirement', and the project cauliflowered happily on. Other projects call this 'requirements creep'. It causes the project to drag on way beyond the budget, and makes people easily forget what the project actually was about.

This time however, they asked the watching users to take the mouse, and change a record in a database. A rush of excitement was felt by the users: this was the first time in two years that they were allowed to do something themselves. The demonstrator said: "Now you do this, and then you do that, and then you see that this happens." (Sorry, I cannot tell you the actual details of the project).

The users did it a few times and said: "OK. That's exactly what we expected." No Questions - No issues. For the first time in this project.